Timothy Walch is an advocate for the preservation and use of documentary information in all its manifest forms. His particular focus is the preservation and use of information on paper – personal letters, public documents, business records, photographs of community activities, and local and county publications of all varieties. His goal is to protect our knowledge of the past so that it is available to inform the present and the future.

Timothy Walch is the director emeritus of the Herbert Hoover Presidential Library in West Branch, Iowa. Over the course of his 23 years at the library, Dr. Walch maintained a collection of more than eight million documents for use by scholars and students of all ages and directed a talented team of designers and curators in the development and fabrication of more than five dozen exhibits on a broad range of historical topics.  All of these efforts were to inform and educate the general public about the importance of documents and artifacts to our understanding of the American experience.

Educated at the University of Notre Dame and Northwestern University, Dr. Walch continues as an active advocate for the preservation of historic records through his membership on the Iowa Historical Records Advisory Board and as a Technical Assistance Network (TAN) consultant as sponsored by the State Historical Society of Iowa.

Over the past forty years, Dr. Walch has used a variety of platforms to advance the cause of preserving and interpreting the American experience.

He is the author or editor of two dozen books and over 250 articles on a broad cross section of historical topics.  Information on a selection of these publication is available elsewhere on this site.

He has been a guest on all of the national cable news networks in the United States including Fox News, MSNBC, CNN and CSPAN and he is a regular contributor to programs broadcast on Iowa Public Radio and Minnesota Public Radio.

He is frequently consulted and quoted by journalists who write for national publications such as the New York Times, the Washington Post, USA Today and Time.com. 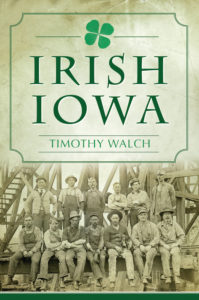 Iowa offered freedom and prosperity to the Irish fleeing famine and poverty. They became the second-largest immigrant group to come to the state, and they acquired influence well beyond their numbers.

The first hospitals, schools and asylums in the area were established by Irish nuns. Irish laborers laid the tracks and ran the trains that transported crops to market. Kate Shelley became a national heroine when she saved a passenger train from plunging off a bridge. The Sullivan family became the symbol of sacrifice when they lost their five sons in World War II.

Walch details these stories and more on the history and influence of the Irish in the Heartland.